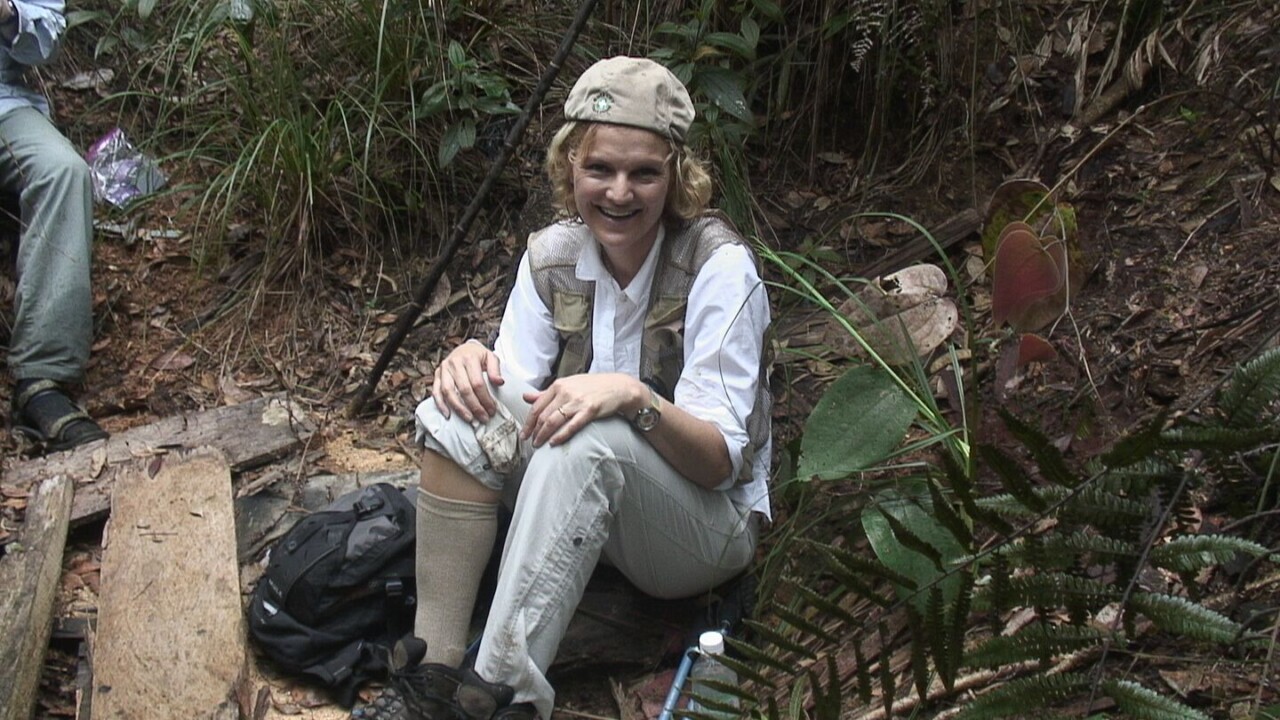 A Survival Story: Interview with Annette Herfkens, the Sole Survivor of the Plane Crash in Vietnam

They had no idea that their dreams would be soon shattered forever in a fateful plane crash that would take the lives of twenty-three passengers and six crew members. 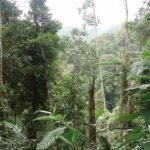 It is believed that the pilot made a navigation error and that the suddenly changing weather contributed to creating extreme turbulence causing the crew to lose control over the aircraft. The plane struck the ridge of the mountain. It lost one wing, but it was still flying until it finally crashed into the next mountain.

The plane crashed nineteen miles from Nha  Trang and ten miles from the nearest village. Very soon Annette realized that she was the sole survivor of that fateful crash – her fiance was dead, so were the rest.

In the picture – Vietnamese jungle

Today, twenty-three years later, Annette Herfkens is well and alive, and she agreed to share her story of survival and spiritual awakening.

Annette: Where I was sitting turned out to be irrelevant because I was “flying around like a lonely piece of laundry in a dryer” as I describe in my book. All the other people were killed because their ribs got crushed into their lungs; in the meantime, I had a free fall, and I was flying around and around hitting my head and limbs against the ceiling, baggage lockers, and chairs until I landed and got stuck … Why me? I think I was just lucky… it was pure luck … or no luck, whatever you want to call it.

J.G.: Could you describe your thoughts and feelings while the plane was going down?  Are these feelings still fresh and alive in your mind today? 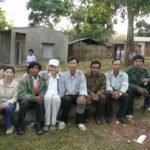 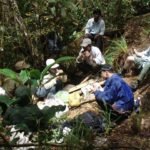 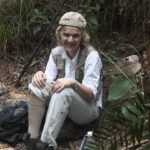 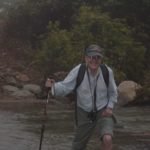 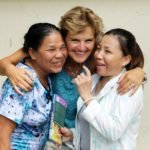 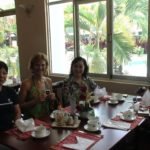 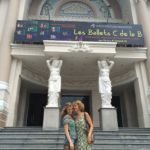 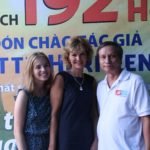 In the pictures – Reunion with the rescuers in Vietnam

Annette: What I am telling the family members of the victims of plane crashes is that the plane goes so fast that you don’t have time to realize what is happening. I don’t think that people were seeing life going in front of their eyes like a movie while going down, because you are just wondering what is happening, and by the time you realize it you are basically dead.  Perhaps it is the fastest and most beautiful quick death that you can think of. Unfortunately, I woke up.

J.G.: For eight days you were all alone in the jungle not able to move, in pain, without food and only rainwater to sustain you. What helped you to survive in this situation?

Annette: What made me survive in the situation was the trust that the people who love me would come and look for me and … it made sense that, in a case when a plane goes down, they would look for you. I trusted that they would make an effort. In the meantime, I focused on the beauty of the jungle and not on the dead, the maggots, and the smell. And the more I looked at the beauty around me, the more beautiful it became.

J.G.: When your family in Holland found out about the plane crash, they accepted the loss of their daughter, correct? But one person (not a member of your family)  refused to believe that you were dead. He traveled to Vietnam in hopes to find you. Could you tell me more about that?

Annette: My father was in the process of searching for me, but my family was convinced that there was no chance that I could survive in the massive plane crash where everybody was dead.  My parents accepted the loss of their daughter.  They put out the notice of the missing person. My family basically wanted closure…

In the meantime, Willem’s (my fiance’s) family announced the death of their son. When my colleague I was working with in Madrid went to the office, my boss told him, ” I have to tell you something… Annette has died, she is missing after the plane went down”.

“But the plane is missing,” he said, “it means that she is not dead”… He refused to believe that I was dead.

Every time when someone in the office referred to me in the past tense, he would become angry. He would say, “She is… she is…”  Then he said to the boss,” I will go to Vietnam, and I will bring her back.” And my boss said, “Don’t spare any expense. We will pay as much as needed”.

He went to my apartment to get some stuff to officially identify me, including my dental records, even though he was convinced that it wasn’t necessary; he also took my hairbrush for some reason, and then he went to Geneva to get a visa in the Vietnamese Embassy. Then he flew to Holland to see my parents, and he told my father, “I will bring your daughter back.”

My father’s brilliant, but rational  mind, could not accept this kind of irrational talk,  “You are fooling me and giving me false hope… who are you to say that she is still alive?”

J.G.: How did your life change when you finally came back home to Holland? Did your perspective on life change?

Annette: I had a near-death experience, and I had a shift of consciousness, but I decided to keep it to myself. I wanted to keep everything the same as before.

My fiance was dead, and that was the worst for me – I lost my right arm, my soulmate, and my future… I acted as if I was the same as if everything will be the same and people around me didn’t see any change. But, of course, my perspective on life had changed. Also, my perspective on death had changed, even more than on life.   My life without my fiance was unbearable for me. I chose to focus on mourning.

J.G.: Annette, thirteen years after the plane crash you returned to Vietnam to climb the same mountain again. Did you try to relive that fateful event and put some kind of closure in your mind, or was there something else that motivated you to do it?

Annette: It was not a closure… It was more like an opening… I hadn’t been in the Far East since my accident; also, I was remembering my beautiful shift of consciousness experience that I had in the jungle… I wanted to check again if what I felt and experienced was right before I started writing my book. Also,  I wanted to meet my rescuers…  It was time to go back… It was not a closure, it was about opening my heart more than anything else as I felt a little bitter towards Vietnam.

J.G.: In your book “Turbulence: The Survival Story” you describe your life as a keen observer, with humor, and in a down-to-earth manner. However, you had another challenge to face when you found out that your second child was autistic. 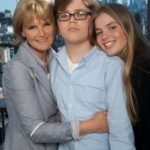 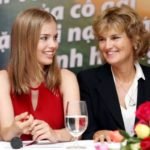 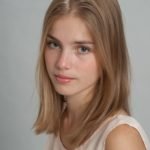 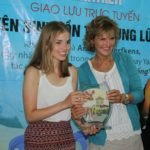 Annette: In the situation with my autistic son, I did the same thing I did in the jungle – I accepted the situation as it was. After my plane accident, my expectations were high that nothing bad could happen to me. It began with a period of mourning. When in my mind I accepted what my son couldn’t do, I saw what was there, what was possible… And what was there was beautiful…

In the pictures  (above) Annette with her children

J.G.: Annette, you are sound and well and even stronger and more powerful today after everything that you went through. Do you have a message for other people that you would like to convey?

Annette: A few messages that I have are related to my “jungle” experience. I survived not by judging, not by listening to my mind but by listening to my heart. The mind makes up stories, scenarios, creates fears. When you stay in the “here and now” moment, listen to your intuition, then things turn out to be OK. Also, I ask people to be compassionate towards each other, putting themselves in other people’s shoes.

J.G. Thank you for sharing this incredible story of survival and hope. You are a true inspiration for all of us!

Today Annette Herfkens lives in NYC with her two children. Her book “Turbulence: The Survival Story” was published in seven languages and is available on amazon.com – Turbulence: A True Story of Survival

You can read more about Annette at her author page on amazon.com Annette Herfkens short biography