Daisaku Ikeda (born January 2, 1928, in Japan) is a peacebuilder, Buddhist philosopher, educator, author, and poet. As the third president of the Soka Gakkai Buddhist organization in Japan, founding president of the Soka Gakkai International (SGI) and founder of several international institutions promoting peace, culture, and education he has dedicated himself to bolstering the foundations of a lasting culture of peace.

Central to Ikeda’s engagement has been his conviction in the power and necessity of dialogue. He has met with key leaders, cultural figures and scholars from every region of the world to discuss ways of resolving the common challenges facing humanity. He has also published dialogues probing the crucial issues of our time with over 70 such individuals. He has devoted particular efforts to building trust and fostering cultural exchange in contexts of historical division and conflict.

A core focus of Ikeda’s peace activities has been the goal of nuclear disarmament. As a leader of the SGI, he has inspired grassroots efforts for a nuclear-weapons-free world over several decades and has continued to explore viable routes toward nuclear abolition in his peace proposals, published annually since 1983.

As the founding president of the SGI, Ikeda has led the development of one of the world’s largest and most diverse community-based Buddhist associations, promoting a philosophy of empowerment and social engagement for peace. The educational system founded by Ikeda—which includes the Soka Schools system in Japan and Brazil, Soka University in Japan and the USA, and Soka Kindergartens in six countries—promotes an ethos of global citizenship, encouraging youth to take the lead in establishing a more hopeful and positive direction for the global society. 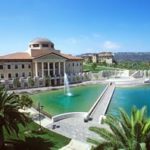 The Soka University of America (SUA) in Aliso Viejo, California, USA, is a non-profit, coeducational university offering a comparative study of Eastern and Western perspectives integrated across a traditional liberal arts curriculum. SUA is open to students of all beliefs, committed to diversity in its academic community, and founded on the belief that student-centered education that fosters a global humanistic perspective of the world will advance the cause of lasting peace and lead to real solutions to humanity’s most pressing issues.

“What we need most is to restore and revive our humanity. We must create a society where people can live with dignity, a society where people can live in peace and happiness. People are tired of games played for power and profit. People are tired of hatred and conflict. They want to live with more wisdom, confidence, and peace. It may seem like a long and distant path, but I am convinced that the twenty-first century must see a movement to sow the seeds of peace, happiness, and trust in every person’s heart. The seeds of a truly humane way of life. I am convinced this is the only path.” 1–Daisaku Ikeda

If faith in people’s fundamental capacity for change is the essence of Ikeda’s Buddhist humanism, “human revolution” is the concept that describes the mechanism of this change. It is the belief that self-motivated, positive change within the inner life of an individual will bring about a change in one’s environment–a process that will ultimately effect a change in society.

Ikeda sees the process of individual human revolution as ultimately the only way in which lasting peace can be established. “Each [revolution] has its own significance and, often, a necessity. But no matter what one changes, the world will never get any better as long as people themselves–the guiding force and impetus behind all endeavors–remain selfish and lacking in compassion. In that respect, the human revolution is the most fundamental of all revolutions and, at the same time, the most necessary.” 2

The human revolution is not something extraordinary or divorced from our daily lives. It begins with an individual identifying and challenging those things which inhibit the full expression of his or her positive potential and humanity, such as fear, laziness, and arrogance. And it is a process that takes place amidst the particular challenges of an individual’s day-to-day reality. It is, however, about raising one’s awareness, “expanding your gaze beyond your restricted, ordinary, everyday world and striving for and dedicating yourself to achieving something more lofty, more profound, more all-embracing.”3 This process can be described as a transformation from a self-bound by self-concern and the ego to one characterized by altruism and the wisdom that accompanies genuine concern for others.

In Ikeda’s philosophy, it is the transformative capacity of the individual that holds the key to broader social change.

The concept of the human revolution can also be seen as a contemporary and practical description of the process of “enlightenment”–an ideal that is core to Buddhism but has often proved ill-defined and elusive.

“Some people say the prevailing mood in the world today is one of powerlessness . . . Decisions about political, economic and environmental issues all seem to be made somewhere beyond our reach. What can the individual accomplish in the face of the huge institutions that run our world? This feeling of powerlessness fuels a vicious cycle that only worsens the situation and increases people’s sense of futility. At the opposite extreme of this sense of powerlessness lies the Lotus Sutra’s philosophy . . . that the inner determination of one individual can transform everything; it gives ultimate expression to the infinite potential and dignity inherent in each life.”4

Ikeda asserts that structural changes–changes in political and social institutions, for example–will ultimately fail in their attempts to bring lasting benefit to humankind unless they are driven or accompanied by the internal reformation of the individual. Herein lies the function and value of spirituality–the ability to initiate positive change from within the life of the individual.