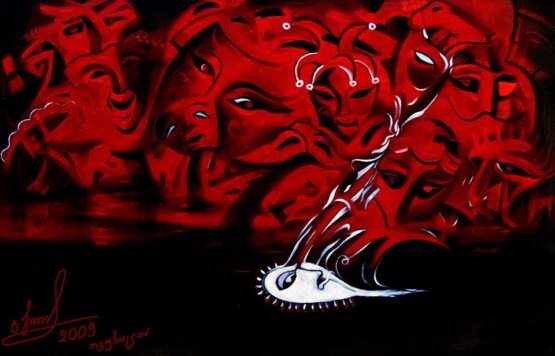 How Disorientation Leads to Destruction. (Originally published on December 5, 2015.) Over the last three weeks, since the horrific terrorist attacks in Paris – and now the shootings in St. Bernardino which seem to be linked to terrorism – many of us have been seeking explanations.

Picture from EMN Online Museum of Art  by Gio Kadagishvili (above)

What makes it possible for human beings to behave with such cold brutality and violence? It’s much too simplistic to ascribe their behaviour to some innate “evil”, or to say that they are insane. Instead, it’s important to look at the psychological factors which give rise to terrorism. 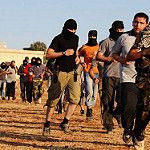 In my view, the most salient fact about the terrorists who staged the attacks in Paris – and which applies to terrorists generally – is that they are people who have had problems with integration and identity, and who have felt alienated and disenfranchised. The life stories of the Paris terrorists which have been released show a general profile of people who have been drifters, with no sense of meaning and purpose in their lives, who have not managed to find a place for themselves in society. They are often people who are caught between two cultures – their own immigrant culture and that of the culture they live in – and don’t feel at home in either. They are typically people who have spent their adolescent years in a strong sense of existential instability, a sense of disorientation and confusion.

Such people are especially vulnerable to the ideology of manipulative religious demagogues because they crave for the sense of certainty and purpose which fundamentalist religion provides. Religious belief systems are appealing to them because they seem to make complete sense of the world. They provide a narrative which gives everything a place, including them. They provide an explanation for every event, and an motive for every action. For people who suffer from existential instability, this certainty is intoxicating.

But it’s equally important that fundamentalist religions provide a strong sense of belonging, which these people have always lacked. The groups’ ideology and their common goals bind them together, along with their certainty that they possess the truth – that out of all the others, it is only their interpretation of reality which is correct.

Effectively, these people allow themselves to become psychopaths. They switch off their empathy and compassion to other human beings, outside their own group. The conceptual framework of their ideology turns other people into abstract entities to them, with whom they have no emotional connection. They perceive the world thorough the conceptual apparatus of their ideology, rather than through direct experience. Their intoxicating sense of belonging, identity and certainty they possess as members of their group enables them to disconnect themselves to all other groups, and all other people.

In my view, it is also significant that most terrorists tend to me young – seldom over the age of 30 – and that they tend to be male.

Adolescence and early adulthood is a very difficult phase of life. It is a time when we develop a sense of being autonomous, separate individuals, living in our own mental space. This creates a sense of vulnerability and insecurity. Our sense of separateness can create anxiety and a sense of isolation. This is why adolescents are so sensitive to peer pressure and so keen to “fit in” and belong, and so follow fashions or rock bands, or join sub-cultural groups. They crave for acceptance and belonging to escape their sense of isolation.

And this sense of isolation and vulnerability seems to be especially strong in males. Females don’t seem to experience “ego-separateness” to the same degree. It’s unclear whether this is due to environmental factors, or innate psychological and biological ones, but females seem to be generally more relational than males, finding it easier to make connections and find emotional support.

This is one of the reasons why the suicide rate is so high in young men under the age of 25 – because of their sense of isolation, they have difficulty in finding emotional support and sharing their problems with others. It’s also why the great majority of gang members are young males, since gangs provide a strong sense of belonging and identity.

And this also applies to terrorists. The terrorist mentality can be seen as a pathology – a form of psychopathy – rooted in deep sense of existential anxiety and disorientation, which is especially acute during adolescence and early adulthood.

Steve Taylor, Ph.D. is a senior lecturer in psychology at Leeds Beckett University, UK. He is the author of Back to Sanity: Healing the Madness of our Minds.  Learn more at www.stevenmtaylor.com.