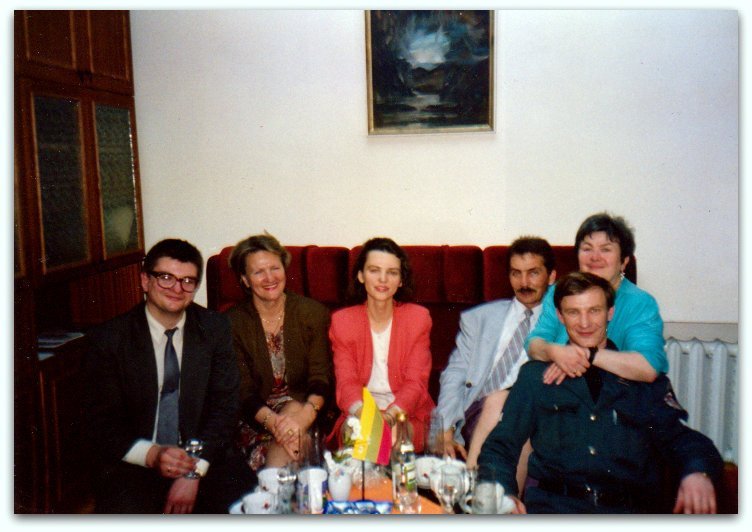 J.B. Gattini, The Time of My Life: Reception

Moscow, Russia, December 1992. There was a diplomatic reception held at the Consular Department of the Ministry of Foreign Affairs of the Russian Federation. It was a major diplomatic event of the year, and all the foreign ambassadors and consuls were present.Despite the economic hardships and the collapse of the Soviet Union just over a year before, the reception was grand. Appearances meant everything to the Russians, and no expense was spared for the occasion – beautifully decorated tables were filled with the  Russian delicatessens and waiters walked around with trays offering the best champagne and caviar.

The reception room was quite big but small enough to observe everyone present.  It was filled mostly with middle-aged men and few women for decoration purposes.

Suddenly everyone’s attention was caught by a young woman in her twentieth entering the reception hall.  She was inappropriately young to be there. Who was she? Maybe she was lost? Everyone stared at her, not diplomatically at all. And why on Earth was she smiling?

I was that young woman,  a consul representing the Lithuanian Embassy in Moscow. It must be said here that Lithuania was the first country to declare independence from the Soviet Union, the country that made a major contribution to the peaceful destruction of the Soviet Empire.

When I was entering the reception hall, I felt out of place. The smile on my face was just a cover: besides the fact that I was hopelessly young for the crowd like that and I didn’t know anyone, I was not sure why I was invited at all! My native Lithuania was considered  Soviet enemy number one since March 1990 when my country declared independence setting off the chain reaction that would eventually destroy the Great Bear from the inside. Even though Russia finally officially recognized Lithuania’s independence, there was a lot of animosity that had to be cleared out.

I automatically reached for a drink.  After a few sips of champagne, I felt so much better that I decided to stay for ten more minutes to taste some caviar. And my memories came back to me very vividly.

I remembered how In 1990, after 50 years of occupation, Lithuania declared independence from the Soviet Union.  We did it peacefully, according to the Soviet Constitution and international law.

In response, Soviet tanks surrounded our parliament, took over TV, started economic blockade, and tried to provoke military action. It would have been easy for the Soviet military to provoke a short bloody war the U.S.S.R. would have easily won.  It didn’t work, however! Lithuanians would not be provoked. We refused to fight! Instead, people surrounded the Parliament, arms linked in a human chain, and sang patriotic songs. It was a peaceful singing revolution!  We demanded our right to be free legally and peacefully.

The Soviet military was lost. They didn’t know what to do. They couldn’t shoot at the peaceful singing people. With no one to shoot at,  they were reduced to driving the tanks around the city trying to intimidate everyone.

At that time, I just started working at the Lithuanian Representation in Moscow. It was my first job. Suddenly, almost overnight, everything drastically changed – our representation became an Embassy! I became the first Consul of Lithuania in Moscow.  Our parliament appointed a new Charge D’Affairs, but consul’s position was left to me.

To represent the revolutionary government that was surrounded by the Soviet tanks and had no international recognition was neither rewarding nor safe.  As a matter of fact, our freedom could have been crushed at any moment. There was a very real possibility that our Embassy in Moscow would be closed and all employees could be arrested without warning.

I was empowered by the responsibility put on my shoulders!  It was, however, not an easy task. The atmosphere in Moscow was very hostile. Every day the Embassy doors were stormed by angry communists’ crowd. They called us enemies, fascists, separatists. The Soviet propaganda on TV was brutal – the Soviets were the best in the business when it came to fabrication. No lie was too big to help poison the minds of the Soviet citizens.  The Soviet authorities chose the most talented and passionate journalists to do that dirty job.

Their lies were totally preposterous – the Soviet news channel reported that Lithuanians were attacking Soviet soldiers and that the bodies of 13 people that were crushed by the Soviet tanks were brought from the local morgues for the TV cameras. To be called liars by the most notorious liars in the history of the western world was maddening!  How many times I was about to smash TV while watching that skillfully crafted Soviet propaganda!

My phone was tapped, and it wasn’t a surprise – I got used to it easily. In fact, I would make a game out of it: I would say one thing on the phone and something totally different in person!

I didn’t feel any fear. There were two simple reasons for that:  first of all, I  was far too busy – there was so much to do! The second reason -surprise – I was in love. I met this tall and handsome Norwegian gentleman, International TV news reporter, and we fell in love with each other from the first sight! That love empowered me to do my job with love! Every minute of it! They say, when you are in love, everything around you becomes lovable. It is so true! I was too happy to even hate our enemies anymore. Actually, I treated friends and enemies the same way – with love.

I worried about my beloved newsman more than about anything else as he was covering the news on the operation “desert storm” in Iraq during the first Iraq war. He was arrested and kept in Sad-am Husein’s custody for several months. I will never forget the moment when he finally called me from Oslo to tell me that he was safe and alive!

And I will never forget that day when the Soviet Empire peacefully collapsed in August 1991! Everybody was on the streets of Vilnius, my hometown, the capital of Lithuania, celebrating and cheerfully watching the statue of Lenin being lifted from the main square. That was a true miracle, with the Baltic States contributing most to that peaceful destruction.

Here I was,  in December 1992, at the Russian diplomatic reception, a guest of the Ministry of Foreign Affairs, sipping champagne and tasting caviar, grinning from ear to ear thinking about August 1991. Our goals (Lithuania’s goals, not Soviet goals) have been reached, Lithuania is free, and the Soviet Empire is destroyed. I raised my glass, and I made a silent toast, “ To our victory, freedom, independence, love, peace!”  I finished my drink in a gulp, and I was ready to leave.

I saw one gentleman approaching me …He introduced himself, took my arm, and walked with me through the reception hall.  By the end of the evening, he had introduced me to every ambassador or consul present at the reception. From that moment and later on, most of those respectable gentlemen became either my colleagues or personal friends.

Fun times just began –  we Lithuanians had to create a new country, free, independent, and prosperous.  It was the time of my life, and I totally loved it!

One more thing… Don’t forget to love your enemies; they will love you back.