The Legendary Leonard Cohen Passes Away at 82 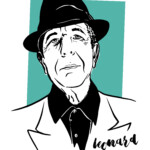 “I did my best, it wasn’t much. I couldn’t tell so I learned to touch. I’ve told the truth, I didn’t come to fool you. And even though it all went wrong, I’ll stand before the Lord of Song with nothing on my tongue but hallelujah.” Leonard Cohen.

November 10, 2016. Canadian poet, singer, songwriter, and novelist Leonard Cohen has died at the age of 82. His work explored all sides of human existence – religion, spirituality, politics, isolation, personal relationships, and sexuality. He was called Master of joy and gloom.

The essence of his work is best described by the Rock & Roll Hall of Fame of the United States: “For six decades Leonard Cohen revealed his soul to the world through poetry and song – his deep and timeless humanity touching out the very core. Simply brilliant. His music and words will resonate forever” (from Biography of Leonard Cohen).
Canadian Prime Minister Justin Trudeau joined those mourning Cohen’s death, saying his work had “resonated across generations. Canada and the world will miss him.”
A memorial will be held for Cohen in Los Angeles on a date still to be announced, according to his official Facebook page.
Editorial credit: Route66 / Shutterstock.com