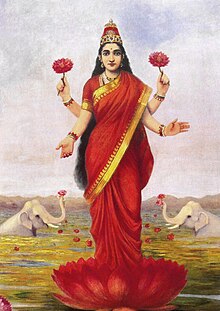 Lakshmi – Ascended master, Hindu goddess of Wealth, Fortune and Prosperity. She is the wife and shakti (energy) of Vishnu, one of the principal deities of Hinduism and the Supreme Being in the Vaishnavism Tradition.

In the ancient scriptures of India, all women are declared to be embodiments of Lakshmi. The marriage and relationship between Lakshmi and Vishnu as wife and husband is the paradigm for rituals and ceremonies for the bride and groom in Hindu weddings.

Lakshmi is depicted in Indian art as an elegantly dressed, prosperity-showering golden-colored woman with an owl as her vehicle, signifying the importance of economic activity in maintenance of life, her ability to move, work and prevail in confusing darkness. She typically stands or sits like a yogin on a lotus pedestal and holds lotus in her hand, a symbolism for fortune, self-knowledge and spiritual liberation. Her iconography shows her with four hands, which represent the four goals of human life considered important to the Hindu way of life: dharma, kāma, artha, and moksha.