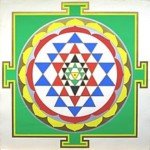 Yantra (यन्त्र) (Sanskrit) (literally “machine, contraption”) is a mystical diagram, mainly from the Tantric traditions of the Indian religions. They are used for the worship of deities in temples or at home; as an aid in meditation; used for the benefits given by their supposed occult powers based on Hindu astrology and tantric texts. They are also used for adornment of temple floors, due mainly to their aesthetic and symmetric qualities. Specific yantras are traditionally associated with specific deities.
Representations of the yantra in India have been considered to date back to 11,000-10,000 years BP
Source of information – https://en.wikipedia.org
Photo of  Sri Yantra by Harish Johari by Daniel Conrad (Chromacon), artwork by Daniel Conrad under the direction of Harish Johari. – Original photo by self (Chromacon), Public domain