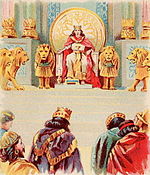 King Solomon was a wealthy and wise king of Israel who succeeded his father, King David. The conventional dates of Solomon’s reign are circa 970 to 931 BCE, normally given in alignment with the dates of David’s reign.

According to the Talmud, Solomon is one of the 48 prophets. In the Quran, he is considered a major prophet, and Muslims  generally refer to him by the Arabic variant Sulayman, son of David.

Solomon was an open-minded man who understood the power of the goddess thanks to the influence of his many wives. He used spiritual alchemy to build the temple of the Ark of the Covenant, based upon architectural plans that his father had received in Heavenly visions, Call upon King Solomon to resolve dilemmas, to build new projects, and to foster tolerance among various religious and spiritual paths.

In the picture – Solomon’s Wealth and Wisdom, as in 1 Kings 3:12–13, illustration from a Bible card published 1896 by the Providence Lithograph Company. Picture from Wikipedia online encyclopedia