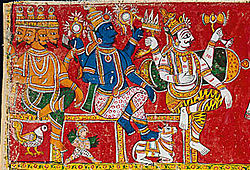 The Trimurti (meaning “three forms” of God), also known as the Hindu Trinity, is an iconographic representation of God in Hinduism, which depicts divinity as a three faced figure. These three faces represent God’s roles of creation, preservation and destruction, which are associated with Brahma (the source or creator), Vishnu (the preserver or indwelling-life), and Shiva (the destroyer and transformer) respectively.